I’m a sun worshiper.  Not the type that lies on the beach all day long, but the type that simply loves the sun shining.  It can be the most bitterly cold day, or everything possible could be going wrong, but as long as the sun is shining, I’m OK and all is well.

As I sit here writing this post it’s snowing outside.  It’s cloudy, dreary and cold.  But not that cold that cuts right through out, but that damp cold that gets into your bones.  It makes sense though because it needs to be that cold for the snow to fall. 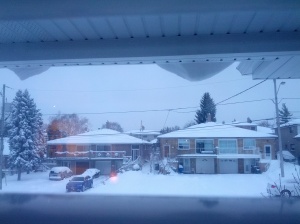 Look at how miserable it is out there

I can’t help but remember that just over a week and a half ago; my hubby and I were in the beautiful Caribbean on a splendid ship celebrating our honeymoon.  The sun shined every day; it was hot, and just glorious – my kind of weather.  I must admit that when we decided to book our honeymoon for mid-January I was worried that I would have a difficult time and be depressed once I got back as the last time I went away at this time of year, it felt like the winter just dragged on forever.  This time it’s different.  Maybe it’s because of the company I traveled with, maybe it’s because I’m not locked up in an office building anymore, or maybe it’s because I can freely enjoy the sunshine as I please.  I think it’s one and three.  I’m grateful to be home with my hubby, to be able to open all the window coverings during the day, and to be able to go outside and soak in the sun when I please.

But my mind does keep going back to our trip.  The islands we visited, the activities we participated in, the events which took place, and specifically the people we met.

We had a blast even though our honeymoon didn’t exactly start off on the right note.  Thankfully hubby asked me to check to see that I had my passport shortly after we departed our home. Needless to say, I didn’t have mine.  And while we were at the airport we had issues checking in.  The flight from Toronto to Houston wasn’t ideal – it was freezing and our seats didn’t recline.  It had to have been one of the worst I had ever been on (and I’ve been on many, many flights).  And once we arrived at Houston Airport, I swear it felt like we were taking part in the Amazing Race.  We had exactly 10 minutes to get from Terminal A to Terminal E to avoid missing our connection. We ran down the terminals with our gear on our back, barely made the inter-airport train.  We arrived at the gate huffing and puffing. Luckily we didn’t miss the flight.

We took the red-eye from Toronto to Houston, and our connection took us from Houston to San Juan.  Our intention was to sleep on the planes – if only that would have happened.  I should have known better because I don’t sleep very well if I’m not in my bed.  What was I thinking?  And so we landed in San Juan at 6 am.  He slept, I didn’t. How lovely.

As we made our way to the baggage claim area, hubby turns to me and says “I wonder if our luggage made it?”  Sh*t!  We barely made it to the flight, so how the heck could our luggage?  As soon as we get to the baggage area I scan to see where I can file a report for lost luggage, and he’s trying to convince me to wait and see as it may have arrived after all.  I love my hubby, I really do.  And I love that he’s such an optimist.  And because we both insisted on our points of view, we both waited – he near the carousel belt, and me in line at the lost luggage reporting area.  Once the belt stopped and our luggage was nowhere in sight, he decided to join me.

So here we were, in beautiful San Juan sans luggage and hubby is chirpy and happy and I’m crusty and sleep deprived.  We have only the clothes on our backs, our backpack and purse and I want nothing more than to put on flip flops.

The only saving grace was that we were told that there was another flight due to arrive in San Juan from Houston that afternoon, and that our luggage will likely be on it, but we were told to call “just in case.”  We made our own way downtown, which is also the pier, and I was starting to relax.  The sun, the beauty everywhere, was taking effect.  We spotted a public pay phone and we decided to call the airline before hitting the sights.  As I’m trying to work my way through the teleprompters, I hear:

“Excuse me, do you need some help?” in a male voice with an accent.

I give hubby a gesture that tells him to deal with it.  As I’m trying to talk to the airline employee I’m also trying to hear the discussion between hubby and the stranger.  I’m failing miserably at both because the payphone keeps crackling and the person on the other end can’t hear me, and I can’t figure out what hubby and stranger are talking about.  So I hang up the phone.

I turn to the stranger and say “No thank you, we don’t need any help.”

He says “But it looks like you do.  I can help you.  See, I work for Air Canada (he points to a badge).  What airline did you fly in on?”

I’m thinking to myself ‘oh boy, I bet he says this to everyone, so I respond “United” which was true.

His face beams “Great, because they’re Star Alliance, which means I can help you. Listen, my office is right there. You can use my phone, my internet, relax and even use the washroom if you need to.” And then he goes on and on about the different places to visit, what time to check in for the cruise, etc.

I’m from the big city.  I was brought up in a time where you locked your front door even when you were home.  You don’t talk to strangers.  You question people’s motives.  I do need to tell you that I try not to live by that, I do believe there is good in everyone, but at that moment I was tired, crusty, in a foreign city with no luggage and I just wanted my flip flops.  I turn to hubby for some direction and the look in his eyes told me everything: ‘Smartie, nothing is going to happen to you.  I’m here to protect you.  It’s OK to go along with this guy. He won’t harm you.’ Oh how I love this man.

Leo (his name) ended up being an angel sent to help us.  As we walked to his office everyone on the road said hi to him: ladies walking with their children, shop keepers, police – everyone.  And as we walked my anxiety melted away.  He was good to every word he spoke to us and more.  It took us over an hour to deal with United and all the while we were in his office.  We never did get our luggage that day and thanks to Leo, not only did we get to see the sights in San Juan, rest in his office, we also were directed where to buy clothes and toiletries at a reasonable price, we were able to check onto the cruise earlier.  If it weren’t for Leo we’d be wearing the same clothes for four days (yes, that’s how long it took for us to get our luggage).

We were so moved by this man who was motivated in helping people just because that’s what he does.  He didn’t want anything from us, but for us to have a good time in San Juan.  Throughout the trip we kept thinking about him, telling people about this angel in an Air Canada hat. We ended up having a fantastic time and he was a big part of it.

And so when our cruise ported back in beautiful San Juan, I was sad that our trip was over, and I was reminded of Leo.  Suddenly we heard “Hey! Did you get your luggage that day?” Hubby and I looked at each other with smiles from ear to ear.  We turned around and there he was!  LEO!!!!

He was at it again, trying to help us.  He was trying to organize our transfers to the airport, and when he found out that we had half a day in San Juan, he grabbed my luggage and started walking.  We followed him to the tourist office.  He insisted that we enjoy the local festival and not to worry as our belongings would be safe.  He gave us a curfew and when it was time to go to the airport he came with us, ensured we checked in safely and walked us to our gate.  He even tried to see if he could get us on a direct flight home!

I began writing this post before leaving for our honeymoon.  The one I was writing before had obviously had different content, but essential the meaning of the two are very much the same.  They both have to do with the book “To Kill A Mockingbird.”

I read this book in high school and it stayed with me since.  I love that book and meeting Leo just emphasized one of the key learning of the book.  And no, he didn’t kill a mockingbird, which is never actually done in the book, but rather that you aren’t to kill one.

And I was prepared to kill one (figuratively, not literally).  You see, in San Juan I was so wrapped up in my own misery that I couldn’t see beyond my nose.  I was so set on trying to find out what Leo was up to, what he wanted from us, what his next move was and because of my hubby’s optimism, his outlook on life and mankind and his love for me and my love and trust in him, I was capable of handing over my skepticism and surrendering to the situation.  And because of this, I was able to receive what was being gifted to me at that very moment.

Leo ended up being that mockingbird for me.  In the short period that he entered my life I noticed that all he wanted was to ensure that hubby and I were blessed with his song.  I was also reminded of the final words in the book, when Scout tells Atticus about misunderstandings off Boo Radley, and how he hadn’t done anything of the things she thought he did, that he was “real nice.”

Atticus’ response to that was “most people are, Scout, when you finally see them.”  And when I finally was able to see Leo I could see just how ‘real nice’ he just is.

I’m also amazed in the synchronicity of it all.  I didn’t feel comfortable in publishing the first post.  It just didn’t feel right and I knew I just had to wait, that something else was to come along to write about.  Never in a million years did I think this was going to happen and that we would have a beautiful angel/mockingbird in San Juan named Leo.

Oh, by the way, yesterday we received a beautiful email from Leo.  He wanted to know if we arrived home safely.  Our hearts were touched once again by our angel in San Juan. 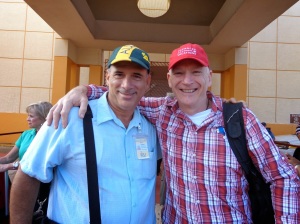 Our Leo and Hubby (they exchanged hats).

2 thoughts on “How Do You Kill a Mockingbird?”